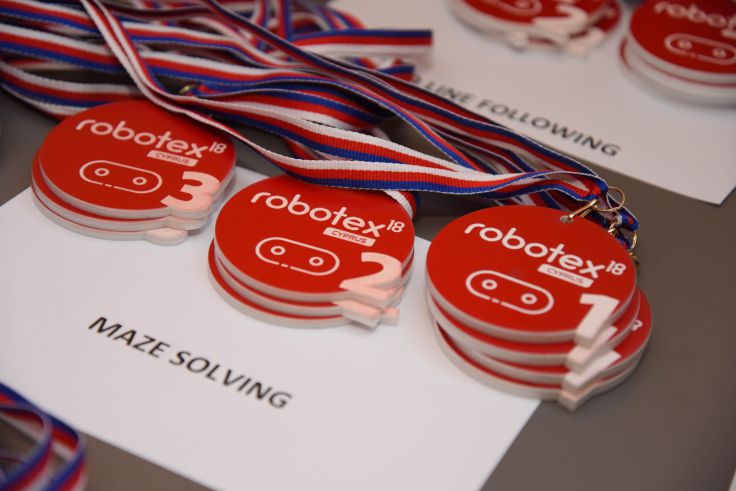 The award ceremony of the winners of Robotex Cyprus 18 was completed with great success and was welcomed by Mrs. Vassiliki Anastasiadou, Minister of Transport, Communications and Works. The 2nd Pancyprian Robotics Competition was held on 23-24 June at the University of Cyprus Sports Center.

Robotex Cyprus is organized by the Cyprus Computer Society (CCS) with the University of Cyprus and the Youth Board of Cyprus as co-organizers, Cyta as a Strategic Partner, Bank of Cyprus as Youth Supporter and the companies ENGINO and UCMAS as gold sponsors. The competition was successfully completed, as the number of participants volunteers and visitors attended the University of Cyprus surpassed all the expectations of the organizers. Specifically, the participants were 871 students, students of all ages (elementary, high school, university), soldiers and adults interested in robotic technology.

During the Award Ceremony that was held on 25 September at the Bank of Cyprus Headquarters, awards were given to all the winning teams participating in the final phase of each challenge. The large venue was packed by the winners, their families and their coaches. In addition to certificates, medals and gifts received by the winners, high school students also received scholarships offered by all Private Universities. Awards were also offered to all the people with disabilities that participated in Robotex Cyprus 2018.

The aim of the competition is to develop educational robotics in our country, that as Mrs. Vassiliki Anastasiadou, Minister of Transport, Communications and Works said, "it contributes to the preparation of society for the future that will be inevitably digital". The ceremony was also welcomed by following representatives of Robotex stakeholder organizations: Costas Agrotis, Board Chairman of CCS, Panagiotis Sedonas, Chairman of the Youth Board of Cyprus, Chris Christodoulou, Vice-President of the Department of Computer Science of the University of Cyprus, George Arestis, IT Director of Cyta and Alexis Polycarpou, President of the IET.

The award ceremony is not the epitome of Robotex Cyprus. Specifically, 39 teams and 125 winners, awarded at the Ceremony, for success in 12 challenges, are eligible to participate in the ROBOTEX International Competition. The competition will take place in Estonia on 30/11-2/12 and the Cyprus team traveling to Estonia consists of more than 120 people.

In addition to the competition, the Organizing Committee of Robotex Cyprus organizes and participates in various actions related to the field of robotics, technology and youth.

Robotex Cyprus: The pancyprian robotics competition organized based on the

standards of the international competition NPO ROBOTEX of Estonia.